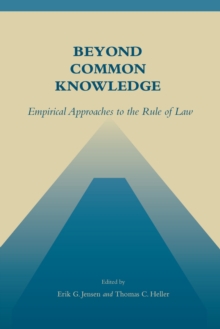 Beyond Common Knowledge : Empirical Approaches to the Rule of Law Hardback

An intensive global search is on for the "rule of law," the holy grail of good governance, which has led to a dramatic increase in judicial reform activities in developing countries. Very little attention, however, has been paid to the widening gap between theory and practice, or to the ongoing disconnect between stated project goals and actual funded activities. Beyond Common Knowledge examines the standard methods of legal and judicial reform. Taking stock of international experience in legal and judicial reform in Latin America, Europe, India, and China, this volume answers key questions in the judicial reform debate: What are the common assumptions about the role of the courts in improving economic growth and democratic politics? Do we expect too much from the formal legal system? Is investing in judicial reform projects a good strategy for getting at the problems of governance that beset many developing countries? If not, what are we missing?