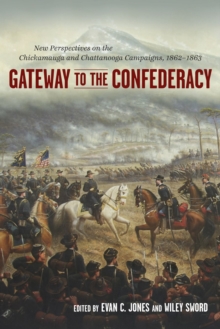 Gateway to the Confederacy : New Perspectives on the Chickamauga and Chattanooga Campaigns, 1862-1863 Hardback

A collection of ten new essays from some of our finest Civil War historians working today, Gateway to the Confederacy offers a reexamination of the campaigns fought to gain possession of Chattanooga, Tennessee.

Each essay addresses how Americans have misconstrued the legacy of these struggles and why scholars feel it necessary to reconsider one of the most critical turning points of the American Civil War. The first academic analysis that delineates all three Civil War campaigns fought from 1862 to 1863 for control of Chattanooga -- the trans-portation hub of the Confederacy and gateway to the Deep South -- this book deals not only with military operations but also with the campaigns' origins and consequences.

The essays also explore the far-reaching social and political implications of the battles and bring into sharp focus their impact on postwar literature and commemoration.

Several chapters revise the traditional portraits of both famous and con-troversial figures including Ambrose Bierce and Nathan Bedford Forrest.

Others investigate some of the more salient moments of these cam-paigns such as the circumstances that allowed for the Confederate breakthrough assault at Chickamauga.