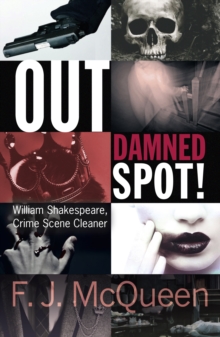 A serial killer is leaving a rather horrible trail of messy murders across London and William Shakespeare, crime scene cleaner, is on his tail, armed with a mop, determination and an inquiring mind.

After cleaning the room in which his half-brother, Kit Marlow, had been knifed to death, Shakespeare starts up his own crime scene cleaning business, Incarnadine, picking up know-how from the net and on the job.

Following a series of clues gleaned from other crime scenes, Shakespeare is soon piecing together suspect profiles and likely modus operandi.

Out Damned Spot! has our hero cleaning up after every crime committed in the works of William Shakespeare but given contemporary settings.

The masterminds behind the actual crimes are based on the writers whose stories Shakespeare 'stole'...... needless to say it's a comedy crime thriller! This is William Shakespeare as you've never seen him before...