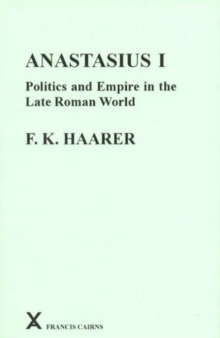 Anastasius I : Politics and Empire in the Late Roman World Hardback

Part of the ARCA, Classical and Medieval Texts, Papers and Monographs series

When Anastasius I came to the throne in 491, the Late Roman Empire was in severe difficulty.

Internal instability, exacerbated by the dominance of the unpopular Isaurians in Constantinople, resulted in a struggling economy, hostile relations with Persia, the abandonment of Italy to a barbarian king, and doctrinal schisms.

Anastasius, an elderly statesman with long experience as an administrator and economist, turned his attention first to the Isaurians, ousting them from the imperial capital and defeating them in their homeland; he could then focus on streamlining the administration, improving the economy, and securing peace and stability on the borders.

At his death he left three hundred and twenty thousand pounds of gold in the imperial treasury, a sum crucial for funding the ambitious and grandiose projects of his successor Justinian. Anastasius I: Politics and Empire in the Late Roman World systematically explores the complex interlocking reforms of Anastasius and examines the governance of the late fifth-century empire.

Seven Appendixes discuss inter alia the primary sources, and the panegyrics of Priscian and Procopius.

The book includes maps, a bibliography and indexes.

Latin and Greek are given in the original and in translation; sources from other languages are quoted in English.