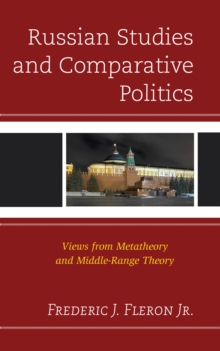 This book brings together several of the author's empirical studies that demonstrate the strength and utility of sociologist Robert Merton's classic middle-range theory for understanding aspects of both Soviet and post-Soviet Russian politics.

Some of those studies demonstrate that testing middle-range social science theory could take place even in the Soviet era when there were significant limitations of access to empirical data, and meaningful field research in the USSR was all but impossible.

In the introductory chapter, the author explains the need for and advantages of studying Russian and Soviet politics from the perspective of middle-range social science theory.

The book concludes with a chapter arguing the advantages of thinking theoretically about Russian and Soviet politics with the establishment of a new epistemic community organized around studies employing middle-range theory. This book presents examples of solutions to long-standing debates between area studies and the academic disciplines and between idiographic and nomothetic approaches to knowledge in the social sciences.

In contrast to the tradition of Carnivals and Cockfights in Russian/Soviet area studies since the mid-20th Century, the book offers a new way of approaching the study of Russian politics for the 21st Century.