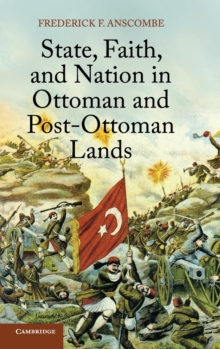 State, Faith, and Nation in Ottoman and Post-Ottoman Lands Hardback

Current standard narratives of Ottoman, Balkan, and Middle East history overemphasise the role of nationalism in the transformation of the region.

Challenging these accounts, this book argues that religious affiliation was in fact the most influential shaper of communal identity in the Ottoman era, that religion moulded the relationship between state and society, and that it continues to do so today in lands once occupied by the Ottomans.

The book examines the major transformations of the past 250 years to illustrate this argument, traversing the nineteenth century, the early decades of post-Ottoman independence, and the recent past.

In this way, the book affords unusual insights not only into the historical patterns of political development but also into the forces shaping contemporary crises, from the dissolution of Yugoslavia to the rise of political Islam.