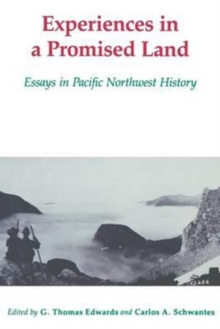 The Pacific Northwest, like many other regions of the United States, has been touted as the Promised Land.

As early as the 1830s, "Oregon fever" brought missionaries, promoters, speculators, politicians, and settlers to the nation's far West.

Spared the ravages of the Civil War and the scars of rapid northern industrialization, the region continued to offer Golden Opportunity.

Its promise encompassed the bounties of sea and land, a mild and healthful climate, and an unusually homogeneous population. Practically since the turn of the century, the Northwest has been a region of paradoxes.

Women, who in Washington had acquired suffrage and lost it in the 1880s, regained it and later elected a woman mayor of Seattle.

Exploitation of workers, despite, or perhaps because of, abundance has been extreme-- and has engendered some of America's most radical labor movements.

Both racial backlash and enlightened reforms characterize the region. Until now, no single-volume history has taken up the modern issues of women, minorities, radicalism and environment.

The editors of Experiences in the Promised Land, G. Thomas Edwards and Carlos Schwantes, themselves teachers and writers of Northwest history, have carefully compiled a selection of essays that treats the full scope of the region's history, with a special emphasis on 20th century topics.

They have gathered together the best of recent scholarship: the work of regional authorities as well as contributions by some of the most promising of the new generation of scholars. A variety of writing styles and approaches, subjects ranging from individual biographies to studies of broad policies and movements, a chronological organization enhanced by concise, insightful chapter commentaries, and an extensive bibliography make this volume indispensable for teachers, students, and the general reader of Northwest history.