French existentialist philosopher Gabriel Marcel (1883-1973) is one of the most influential thinkers of the twentieth century.

The central themes of his philosophy, which are developed with a blend of realism, concreteness, and common sense, continue to be relevant for the plight of humanity in the twentieth-first century.

Marcel's thought emphasizes: the attempt to safeguard the dignity and integrity of the human person by emphasizing the inadequacy of the materialistic life and the unavoidable human need for transcendence; the inability of philosophy to capture the profundity and depth of key human experiences, and so the need to find a deeper kind of reflection; the importance of the experience of inter-subjectivity, which Marcel believes is at the root of human fulfillment, and which also finds expression in the transcendent dimension of human experience, a dimension that cannot be denied without loss, and that often gives meaning to our most profound experiences.

Marcel is also one of the few contemporary thinkers who manages to do justice to the subjectivity and individuality of the human person, while avoiding the relativism and skepticism that has tended to accompany these notions, and that has plagued contemporary philosophy after Heidegger.

He makes an unwavering effort to challenge the moral relativism and spiritual nihilism of his French rival, Jean-Paul Sartre, and of other representative existentialist philosophers. All of Marcel's important ideas are introduced here, ranging from his unique conception of philosophy; to his original approach to epistemology and the nature of knowledge; to his view on the nature of the human person, including the idea of being-in-a-situation and the importance of the "context" that the subject lives in for the subject's ideas and experiences; to his approach to religious themes, including the issues of the rationality of religious belief, the question of God's existence, and our longing for the transcendent; and his "concrete approaches" of fidelity, hope, love and faith.

There are also selections in which he discusses some of his misgivings about the direction of contemporary culture, especially the effects of technology.

Also by Gabriel Marcel  |  View all

Homo Viator - Introduction to the...

The Invisible Threshold - Two Plays by...

Thou Shall Not Die 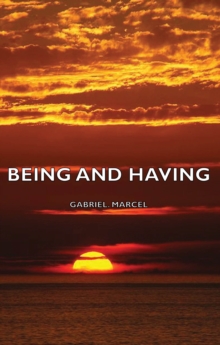