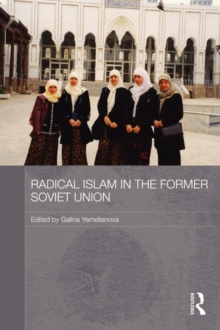 This is the first comprehensive and comparative examination of Islamic radicalisation in the Muslim regions of the former Soviet Union since the end of Communism.

Since the 1990s, the ex-Soviet Muslim Volga-Urals, Caucasus and Central Asia have been among the most volatile and dynamic zones of Islamic radicalisation in the Islamic East.

Although partially driven by a wider Islamic resurgence which began in the late 1970s in the Middle East, the book argues that radicalisation is a post-Soviet phenomenon triggered by the collapse of Communism, and the break-up of the de facto unitary Soviet empire.

The book considers the considerable differences in perceptions and manifestations of radical Islam in the republics, as well as the level of its doctrinal and political impact.

It demonstrates how the particular histories of the regions' Muslim peoples - especially the length and depth of their Islamisation - have influenced the nature and scope of their radicalisation.

Other significant factors include the mobilising power of the global jihadist network, and most significantly the level of social and economic hardship.

Based on extensive empirical research including interviews with leading members of the political and religious elite, the Islamist opposition as well as ordinary muslims, the book reveals how unofficial radical Islam has turned into a potent ideology of social mobilisation.

It identifies the different dynamics at work and how these relate to each other, assesses the level of foreign involvement and evaluates the implications of the rise of Islamic radicalism for particular post-Soviet states, post-Soviet Eurasia and the wider international community.