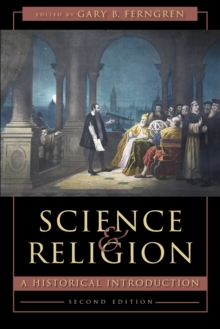 Edited by Gary B. Ferngren

Since its publication in 2002, Science and Religion has proven to be a widely admired survey of the complex relationship of Western religious traditions to science from the beginning of the Christian era to the late twentieth century.

In the second edition, eleven new essays expand the scope and enhance the analysis of this enduringly popular book. Tracing the rise of science from its birth in the medieval West through the scientific revolution, the contributors here assess historical changes in scientific understanding brought about by transformations in physics, anthropology, and the neurosciences and major shifts marked by the discoveries of Copernicus, Galileo, Isaac Newton, Charles Darwin, and others.

In seeking to appreciate the intersection of scientific discovery and the responses of religious groups, contributors also explore the theological implications of contemporary science and evaluate approaches such as the Bible in science and the modern synthesis in evolution, which are at the center of debates in the historiography, understanding, and application of science. The second edition provides chapters that have been revised to reflect current scholarship along with new chapters that bring fresh perspectives on a diverse range of topics, including new scientific approaches and disciplines and non-Christian traditions such as Judaism, Islam, Asiatic religions, and atheism.