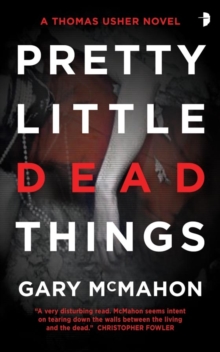 Part of the Thomas Usher series

THOMAS USHER HAS A TERRIBLE GIFT.Following a car crash in which his wife and daughter are killed, he can see the recently departed, and it's not usually a pretty sight.

When he is called to investigate the violent death of the daughter of a prominent local gangster, Usher's world is torn apart once more.

For the barriers between this world and the next are not as immutable as once he believed.Who Is Thomas Usher?

His name is Thomas Usher. A normal man. An average guy. Until he is involved in a tragic accident and his wife and daughter are killed.After that, things begin to change.

Usher is no longer normal. Or average. Now he can see the dead, and the dead can see him. They seek him out to help them, to usher them to the next level so they might face whatever comes next.

The lost. The lonely. The departed. They never speak to him; they only ever demand his attention.The ghosts are drawn to Usher, and he is compelled to help them in the hope that he might once again see his family.

He is an usher for the dead. It's who he is. It's what he does.File Under: Horror [ See The Dead | Skin Trade | Beyond Reality | A Sacrifice ]