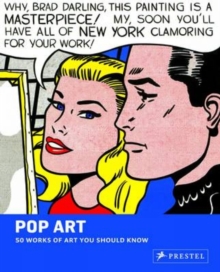 Pop Art: 50 Works of Art You Should Know Paperback / softback

When it emerged in the 1950s, the Pop Art movement presented a challenge to fine art with its incorporation of images from television, newspapers, and advertising.

Over time, Pop Art developed into one of the most influential movements of the 20th century and many of its works have achieved iconic status.

Each work is featured on a beautifully illustrated double-page spread.

An informative text highlights the work's classic characteristics as well as unusual aspects, its significance in the Pop Art movement and its influence on the history of contemporary art, and art in general.

Including brief biographies of each artist, this book is a beautifully illustrated survey of Pop Art.