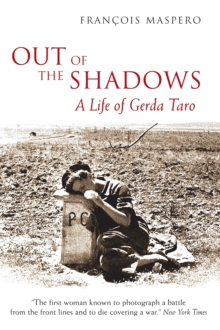 Out of the Shadows : A Life of Gerda Taro Hardback

Establishing her reputation as one of history's most noteworthy war photographers, this account documents the work of Gerda Taro, the first female of her profession to die in action.

Reflecting on the past of the woman born Gerta Pohorylle, this narrative chronicles this German Jew's escape from the Nazi party, her introduction to Andre Friedmann--who would later become the greatest war photographer of the 20th century under his new identity, Robert Capa--and her own adoption of a new alias and the photographic trade.

Taro's portrayal of the Spanish Civil War is examined in detail, surveying her remarkable depictions of the soldiers, refugees, air raids, and battles.

Vividly capturing the extraordinary figures the subject knew and lived with--from Ernest Hemingway and Martha Gellhorn to Louis Aragon--this record also highlights the assertion of political, sexual, and personal liberties that were central to her life.

Demonstrating how her libertarian beliefs, steadfast courage, and eventual death made her a martyr of the antifascist movement, this study shows how Taro has been rediscovered amidst the 21st century as a pioneer for all women.