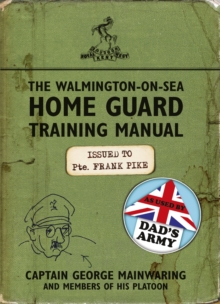 A facsimile of the Walmington-on-Sea Home Guard Training Manual recently discovered in the attic of a house in the town.

Found in a trunk amongst a pile of HOTSPUR comics, it belonged to Private Pike and features his handwritten marginal notes on the text plus his personal jottings on matters of rather less importance than the defence of the realm, such as films he has seen, girls he has dated and the progress of Aston Villa FC.

The book bears the official crest and stamp of the Queen's Own Royal West Kent Regiment, to which the platoon belongs.

Although aged and covered with stains, boot prints, tears and scorch marks, it is in a reasonable condition for facsimile printing.

The manual is Capt Mainwaring's attempt to ready the platoon to face (and recognize) the enemy in the coming invasion of Britain.