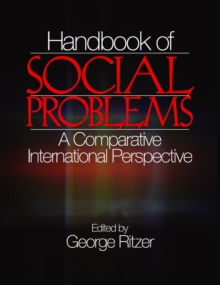 The Handbook of Social Problems provides a unique, broadly comparative perspective on the current state of social problems and deviance in a variety of societies around the world.

This theory is clearly illustrated in this volume by the aftermath of September 11, 2001depicting the vulnerability of the U.S. to social problems in far-removed corners of the world.

In addition, the international and comparative essays in this volume cover other important issues such as the impact of modern technologies on social problems, ecological problems, global inequality, health as a social problem, and much more.

The Handbook of Social Problems is a vital resource for students studying on a number of courses across the social sciences and will be an excellent addition to any academic library.