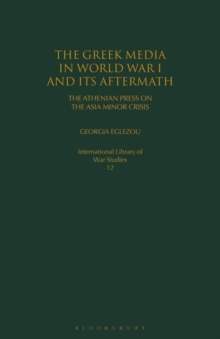 The Greek Media in World War I and its Aftermath : The Athenian Press on the Asia Minor Crisis Paperback / softback

The Asia Minor Campaign remains one of the most disastrous episodes of modern Greek history.

The retreat of the Greek army after being routed by Turkish nationalist forces in Anatolia in 1922 was a catastrophic event.

Yet, as this meticulously researched study of Athenian newspapers from 1919 to 1922 makes apparent, the bulk of the Greek press created the illusion that all was well at the front and hid the reality of impending disaster.

Here Eglezou presents these familiar events through a dramatic new perspective: the role and content of the Athenian press as a means of propaganda.

The reporting of the pro- and anti-government press is closely rendered to provide fascinating insights into why a delusory policy was pursued to the bitter end.

With a comprehensive account of the Campaign, Eglezou adds a new dimension to our understanding of the history of modern Greece, as well as the relationship between the press and politics more generally.