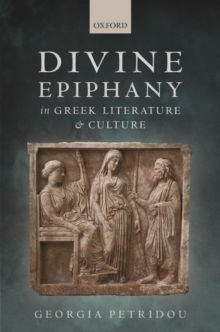 In ancient Greece, epiphanies were embedded in cultural production, and employed by the socio-political elite in both perpetuating pre-existing power-structures and constructing new ones.

This volume is the first comprehensive survey of the history of divine epiphany as presented in the literary and epigraphic narratives of the Greek-speaking world.

It demonstrates that divine epiphanies not only reveal what the Greeks thought about their gods; they tell us just asmuch about the preoccupations, the preconceptions, and the assumptions of ancient Greek religion and culture.

In doing so, it explores the deities who were prone to epiphany and the contexts in which they manifested themselves, as well as the functions (narratives and situational) they served,addressing the cultural specificity of divine morphology and mortal-immortal interaction.

Divine Epiphany in Greek Literature and Culture re-establishes epiphany as a crucial mode in Greek religious thought and practice, underlines its centrality in Greek cultural production, and foregrounds its impact on both the political and the societal organization of the ancient Greeks.