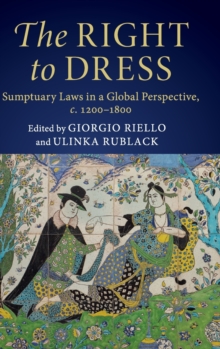 The Right to Dress : Sumptuary Laws in a Global Perspective, c.1200-1800 Hardback

This is the first global history of dress regulation and its place in broader debates around how human life and societies should be visualised and materialised.

Sumptuary laws were a tool on the part of states to regulate not only manufacturing systems and moral economies via the medium of expenditure and consumption of clothing but also banquets, festivities and funerals.

Leading scholars on Asian, Latin American, Ottoman and European history shed new light on how and why items of dress became key aspirational goods across society, how they were lobbied for and marketed, and whether or not sumptuary laws were implemented by cities, states and empires to restrict or channel trade and consumption.

Their findings reveal the significance of sumptuary laws in medieval and early modern societies as a site of contestation between individuals and states and how dress as an expression of identity developed as a modern 'human right'.