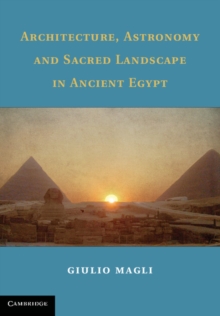 This book examines the interplay between astronomy and dynastic power in the course of ancient Egyptian history, focusing on the fundamental role of astronomy in the creation of the pyramids and the monumental temple and burial complexes.

Bringing to bear the analytical tools of archaeoastronomy, a set of techniques and methods that enable modern scholars to better understand the thought, religion and science of early civilizations, Giulio Magli provides in-depth analyses of the pyramid complexes at Giza, Abusir, Saqqara and Dahshur, as well as of the Early Dynastic necropolis at Abydos and the magnificent new Kingdom Theban temples.

Using a variety of data retrieved from study of the sky and measurements of the buildings, he reconstructs the visual, symbolic and spiritual world of the ancient Egyptians and thereby establishes an intimate relationship among celestial cycles, topography and architecture.

He also shows how they were deployed in the ideology of the pharaoh's power in the course of Egyptian history.