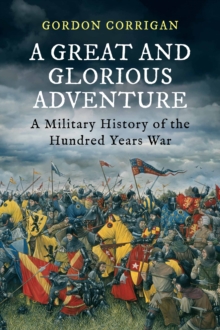 A Great and Glorious Adventure : A Military History of the Hundred Years War Paperback / softback

The Hundred Years War was fought between 1337 and 1453 over English claims to both the throne of France by right of inheritance and large parts of the country that had been at one time Norman or, later, English.

The fighting ebbed and flowed, but despite their superior tactics and great victories at Crecy, Poitiers and Agincourt, the English could never hope to secure their claims in perpetuity: France was wealthier and far more populous, and while the English won the battles, they could not hope to hold forever the lands they conquered.

The real and abiding significance of the war lies in the fact that, at its end, the English had become English, as opposed to Anglo-French, and France too had set out on the road to nationhood. (Both countries would subsequently become the very best of enemies.) The war also sparked a real revolution in the English way of waging war, with increasing professionalism and the use of technology to make up for lack of numbers - factors which remain relevant throughout the subsequent history of the English, and then the British, army and which are still critical to it today.

Military historian Gordon Corrigan's new history of these epochal events is brisk, combative and refreshingly straightforward, and the great kings, men and battles of the period receive the full attention and reassessment they deserve.