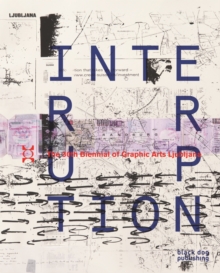 Established 60 years ago, the Biennial is the oldest and one of the most influential recurring exhibitions of graphic art internationally. Originally presenting only the work of printmakers, the Biennial has since expanded to include a wide range of contemporary graphic forms of expression.

Interruption presents the work of this year's exhibiting artists with full-colour images, situated within a framework focused on the Biennial's theme of the impact and influence of both traditional and new graphic media within the local and international context.

This installation considers the evolutionary graphic field of contemporary times.

Essays discuss the Biennial's curatorial focus and other related topics, Dr Deborah Cullen, Curator of the Biennial, introduces this year's edition, whilst writer and curator Petja Grafenauer covers its history.

These are followed by texts devoted to the winners of the Grand Prize and the Honorary Award of the previous edition of the Biennial: Regina Jose Galindo and Miklos Erdely.