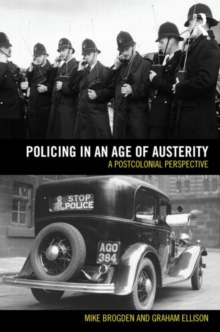 Policing in an Age of Austerity : A postcolonial perspective Paperback / softback

Policing in an Age of Austerity uniquely examines the effects on one key public service: the state police of England and Wales.

Focusing on the major cut-backs in its resources, both in material and in labour, it details the extent and effects of that drastic reduction in provision together with related matters in Scotland and Northern Ireland.

This book also investigates the knock-on effect on other public agencies of diminished police contribution to public well-being.

The book argues that such a dramatic reduction in police services has occurred in an almost totally uncoordinated way, both between provincial police services, and also with regard to other public agencies.

While there may have been marginal improvements in effectiveness in certain contexts, the British police have dramatically failed to seize the opportunity to modernize a police service that has never been reformed to suit modern exigencies since its date of origin in 1829.

British policing remains a relic of the past despite the mythology by which it increasingly exports its practices and officers to (especially) transitional societies. Operating at both historical and contemporary levels, this book furnishes a mine of current information.

Critically, it also emphasizes the extent to which British policing has traditionally concentrated on the lowest socio-economic stratum of society, to the neglect of the policing of the more powerful.

Policing in an Age of Austerity will be of interest to academics and professionals working in the fields of criminal justice, development studies, and transitional and conflicted societies, as well as those with an interest in the social schisms caused by the current financial crisis.