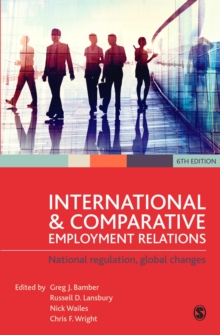 "Each of the contributors to the work are world class scholars.

The editors are similarly elite at their game. In addition, all parties have had a chance to refine their act to the point (now) where they have created something truly indispensable for the serious student of comparative employment relations." - Anthony Gould, Laval University, Canada "The most enduring and valuable book in the field of international and comparative employment relations in the last 30 years, the sixth edition covers advanced and emerging economies with insightful theoretical implications from a comparative perspective." - Dong-One Kim, Korea University; incoming President ILERA "This latest edition is another major contribution by a group of eminent scholars in the field.

It serves to promote the study of comparative employment relations in the current context of globalisation, which is also of topical interest to the International Labour Organization (ILO)." - Guy Ryder, Director-General, ILOEstablished as the standard reference for a worldwide readership of students, scholars and practitioners in international agencies, governments, companies and unions, this text offers a systematic overview of international employment relations. Chapters cover the UK, USA, Canada, Australia, Italy, France, Germany, Denmark, Japan, South Korea, China and India.

Experts examine the context of employment relations in each country: economic, historical, legal, social and political.

They consider the roles of the major players: employers, unions and governments.

They outline the processes of employment relations: collective bargaining and arbitration, consultation and employee involvement.

It offers a new framework for varieties of capitalism in the introduction, and concludes with an insightful account of the forces shaping employment relations in the world economy.