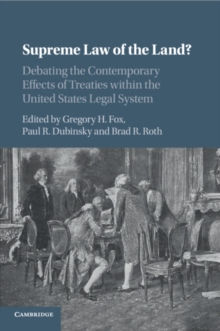 Supreme Law of the Land? : Debating the Contemporary Effects of Treaties within the United States Legal System Paperback / softback

How do treaties function in the American legal system?

This book provides a comprehensive analysis of the current status of treaties in American law.

The book also includes two in-depth case studies: one on the effectiveness of treaties in the regulation of armed conflict and one on the role of a resurgent federalism in complicating US efforts to ratify and implement treaties in private international law.

Each chapter asks whether the treaty rules of the 1987 Third Restatement of Foreign Relations Law accurately reflect today's judicial, executive, and legislative practices.

This volume is original and provocative, a useful desk companion for judges and practicing lawyers, and an engaging read for the general reader and graduate students.