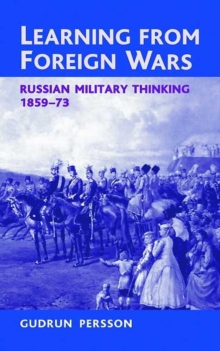 Learning from Foreign Wars examines how the Russian army interpreted the wars in Europe between 1859 and 1871, and the American Civil War.

This was a time marked by rapid change - political, social, economic and technological.

By raising the question of learning from foreign wars the author attempts to fill a gap in the historiography of the Russian army.

The army was one of the pillars on which the Russian regime built its power, and it was crucial for the survival of the regime both in domestic and foreign affairs.

The reactions and thinking of the military at a time of rapid change, therefore, reveal a lot about the regime's ability to adjust, develop, and ultimately survive.

Furthermore, the influence of foreign wars on Russian strategic war planning is analysed with the use of the first Russian war plan of 1873 and the proceedings from the strategic conference, chaired by Alexander II, in 1873.

The influence of foreign wars on the General Staff officer education is also investigated. This book is largely based on extensive research in Russian archives.

Special attention is given to the military attaches and, thus, the author fills a gap in the historiography of the Russian army.

The Russian military attachereports from the European Great Powers 1859-71 and the observer reports from the different theatres of war are also examined, with extensive use made of the military press and contemporary military literature with regard to the wars. About the AuthorGudrun Persson is a lecturer at Stockholm University, specialising in Russian reform periods and focusing on military reforms.

She has published several books and articles on these subjects. 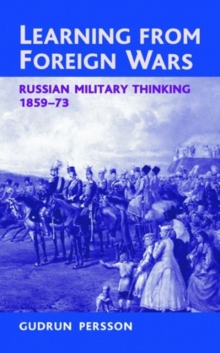