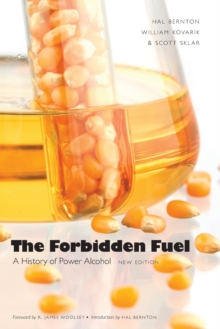 The Forbidden Fuel is the definitive history of alcohol fuel, describing in colorful detail the emergence of alcohol fuel in the nineteenth and twentieth centuries and the political and economic forces behind its popularity, opposition, and eventual growth.

In 1982, when The Forbidden Fuel was first published, approximately 350 million gallons of ethanol were produced in the United States for transport fuel.

In 2008 that number had grown to 9 billion gallons-an approximate average annual growth rate of 98.9 percent.

Similar dramatic growth has occurred all over the world, especially in Brazil.

This new edition examines the forces behind this explosive growth; it also presents fresh evidence that the controversial issues that were presciently foreseen and described in the 1982 edition-limits of the land, food versus fuel, environmental risks, and global warming-still persist as unabated challenges to industry leaders and policy makers.