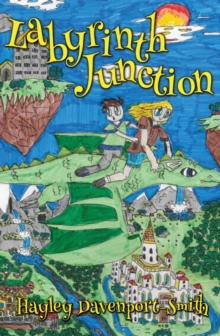 A magical land. A prison in the sky. An underwater city. Little does Ben envisage this is what awaits him as he escapes the clutches of two bullies and climbs into the dark and gloomy cave.

That's when he discovers it, deep inside...Labyrinth Junction, a gateway to other worlds!

Once he gets past the old witch standing guard, he's led down a dark tunnel by a peculiar talking dog into the strange and magical land of Numblebrook and his adventures truly begin!With his life in peril and trapped in Numblebrook, Ben befriends a pretty orphan girl called Amy and her pet dragon.

Together, they and the strange Moonbeamer people set off on a series of dangerous missions in an effort to solve a riddle, free the land of the evil King and get Ben back home. Labyrinth Junction is an exciting and fast moving fantasy story full of perilous adventures and heart warming friendships.

It is a story about the sheer bravery and determination of a young boy who is prepared to risk his life if it means finding his way home.

It will appeal to 8 - 12 year olds with a taste for adventure and excitement.