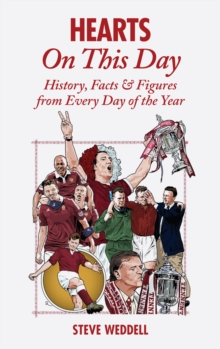 Hearts on This Day : History, Facts & Figures from Every Day of the Year Hardback

Hearts On This Day revisits the most magical and memorable moments from the club's distinguished history, mixing in a maelstrom of anecdotes and characters to produce an irresistible Jambos diary - with an entry for every day of the year.

From the club's humble, romantic origins in Edinburgh's Old Town, to coming within a hair's breadth of extinction at the hands of a Russian megalomaniac, to ultimate redemption in a record-toppling Championship campaign.

Hearts fans have experienced each and every gamut of emotion in the club's 140-year history.

The team were the first in Britain to sign up en masse for the Great War.

While cup wins, a never-bettered 132-goal title-winning campaign, memorable European nights against such luminaries as Locomotive Leipzig, Bayern Munich, Austria Vienna, Bordeaux and Basle all feature alongside a raft of Tynecastle legends.