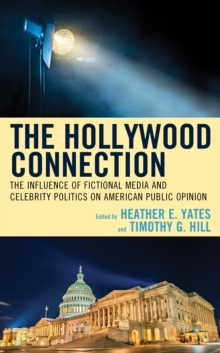 The Hollywood Connection : The Influence of Fictional Media and Celebrity Politics on American Public Opinion Hardback

The Hollywood Connection: The Influence of Fictional Media and Celebrity Politics on American Public Opinion is one of the first edited volumes offered in the political science discipline on the effects of fictional media and celebrity on public opinion, and synthesizes many niche areas of research into single text.

Additionally, it emphasizes the importance of acknowledging a shift in academic focus away from the lateral interactions between celebrities and politicians (and in some cases celebrities becoming politicians) toward research that engages the American audience, as consumers of media, as a critical political component.

The volume offers a collection of diverse research on questions treating the effects of fictional media on consumer audiences and the larger implications for American politics.

This research collection offers both qualitative and quantitative data sources and showcases a variety of methodological approaches (experimental design, public opinion survey analysis, content analysis, etc.), robust theoretical applications, and encompasses a variety of conduits, ranging from television sitcoms to horror films to the action drama 24, that make it both compelling and timely.