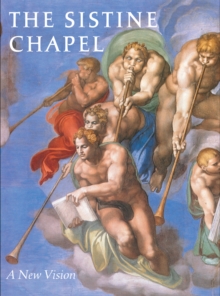 The frescoes of the Sistine Chapel are often viewed as a striking study in the contrast between the middle and High Renaissance styles.

On the one hand, the scenes painted on the chapelGCOs walls by Botticelli, Ghirlandaio, Perugino, Rosselli, and Signorelli (1481GCo82), which depict parallel events in the lives of Moses and Jesus (and allegoricallylegitimize the power of the pope), exemplify the narrative art developed in quattrocento Florence, in which multiple incidents and numerous draped figures are depicted in a single view.

On the other hand, MichelangeloGCOs scenes from Genesis on the chapelGCOs ceiling (1508GCo12) epitomize the art of the High Renaissance, with its emphasis on compositional clarity and the human form, and his immense Last Judgment on the chapelGCOs altar wall (1536GCo41) even anticipates Mannerism, which pushed the expressive power of the nudeGCohypertrophied and elaborately posedGCoto its limit.In this boldly original book, sure to inspire lively discussion among all students and enthusiasts of art history, noted scholar Heinrich Pfeiffer reveals that, despite their stylistic diversity, the frescoes of the Sistine Chapel display an iconographic unity of hitherto-unsuspected depth. Drawing on years of research, he argues that neither the frescoes of the quattrocento masters nor even those of Michelangelo are free artistic embellishments on the prescribed themes; rather, their every detail has a specific symbolic meaning that is to be discovered only in the texts available to contemporary papal theologians.

As a whole, he asserts, this symbolism constitutes a single iconographicprogram that underlies (without supplanting) the frescoesGCO more obvious thematic and allegorical meanings, and that expresses metaphorically a number of key theological concepts, such as the Trinity and the analogy of Christ and His Church to groom and bride.With his clearly reasoned text, Pfeiffer leads us to a new understanding of the Sistine Chapel as a collaborative creation, encompassing not only GCGBPthe agony and the ecstasyGC[yen] of Michelangelo and his artistic forebears but also the faith and erudition of the theologians who closely advised them. He inspires us to take a fresh look at this great monument, the entirety of which is illustrated here in stunning full- and double-page photographs that faithfully reproduce the brilliant colors revealed by the frescoesGCO recent restoration.

Just as significantly, he reminds us of the importance of iconography to the full appreciation of art, and of the close links that so often existbetween text and image.