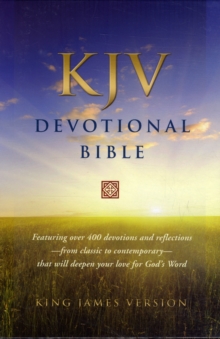 Featuring over 400 meditations from classic to contemporary that will deepen your love for God s Word Introducing the first devotional Bible using the King James Version.Devotional Bibles became popular twenty years ago, and today they comprise a large portion of the Bible market.

But until now, there has never been a devotional Bible for those who love and use the King James Version.Featuring more than 400 devotions, quotes and selections that have been carefully chosen to reflect the impact that the powerful language of the King James Version has had on writers over the span of four centuries, the Hendrickson "KJV Devotional Bible" is the first of its kind.The devotional selections are interspersed throughout the Bible, placed near related scripture passages, allowing the reader to go at his/her own pace rather than follow a prescribed sequence.From Charles Wesley to Dallas Willard, C.

S. Lewis to Elisabeth Elliot, the featured contributor list reads like a Who s Who in the pantheon of Christian thinkers.Featuring devotions from the following authors: Bayley, JosephBence, Evelynten Boom, CorrieBounds, E.