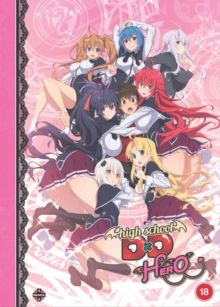 All 12 episodes from the fourth season of the Japanese anime based on the light novel series by Ichiei Ishibumi.

The programme follows high school student Issei (voice of Yuki Kaji) who, after being killed and reincarnated as a devil, serves his master Rias Gremory (Yôko Hikasa) and fights off supernatural threats along with the other members of the school's Occult Research Club.

The episodes are: 'That's Right, Let's Go to Kyoto', 'School Trip, an Abrupt Attack', 'The Party of Heroes', 'Showdown!

Gremory Family Vs Hero Faction in Kyoto', 'My Potential Released!', 'The School Trip Is in Pandemonium', 'We Are Preparing for the School Festival!', 'A Girl's Heart Is Complicated', 'The Deciding Battle of the Strongest Youth, Begins!', 'As a Family Member of Rias Gremory', 'Man Against Man' and 'Lion Heart of the School Festival'.