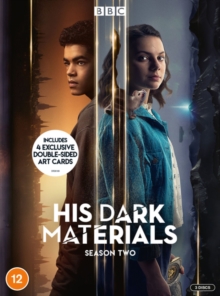 All seven episodes from the second season of the BBC fantasy adventure based on the trilogy of novels by Philip Pullman.

In an alternate world, orphan Lyra Belacqua (Dafne Keen) grows up in the care of Jordan College, Oxford, along with her daemon Pantalaimon (voice of Kit Connor).

Having stepped through a portal into an alternative universe Lyra befriends Will (Amir Wilson) who has never encountered daemons before.