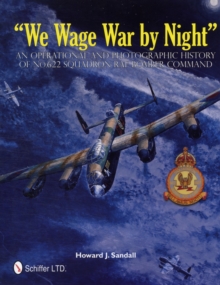 We Wage War by Night: An erational and Photographic History of No.622 Squadron RAF Bomber Command Hardback

622 Sqdn. was just one of many Bomber Squadrons whose airmen carried out nightly missions, putting their lives on the line for King and Country during WWII.

This account is relayed through the memoirs, diaries and letters of the men and women who fought and died throughout this dark period.

These young men came from all parts of the Commonwealth to unite under the banner of freedom and democracy.

By wars end, they had forged themselves into one of the most formidable fighting forces in the history of air warfare.