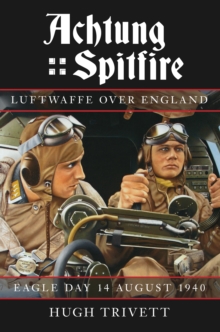 14 August 1940, which Hitler code-named `Adlertag', or `Eagle Day', was fated to become one of the most significant days in the Battle of Britain.

It signified the start of the Luftwaffe's aerial offensive, planned to cripple Britain and clear the path for the German troops ammased in readiness for invasion.

The Luftwaffe sent out waves of unescorted bombers to attack difficult and long-range targets by daylight, hoping to confuse and split the fighter defences with the small but numerous bomb formations.

The tactic was a calculated gamble and one that cost the Germans deeply.

Despite successes in attacking and damaging airfields, the losses were severe and and the following day Goering vetoed such tactics, now convinced his bombers could never operate over Britain without fighter cover.

Using first-hand recollections of both Luftwaffe and RAF pilots as well as local witnesses to the day's action, gleaned from interviews and written accounts and with many unpublished photographs, Hugh Trivett has collated the definitive record of Eagle Day.