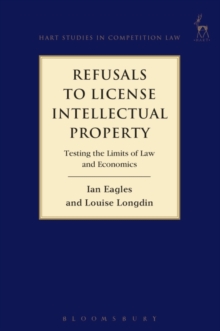 In competition cases, by contrast, economists are familiar figures in the courtroom and the language of economics is scattered throughout the judgments of even the highest courts.

One might expect, therefore, that refusals to license intellectual property would generate the same fruitful symbiosis between law and economics when those refusals surface in competition proceedings.

This however, has not been how the law on this subject has developed in most jurisdictions.

Courts and enforcement agencies faced with a unilateral refusal to license have instead tended to retreat into sketchily articulated black letter rules and presumptions which then have to be fenced off from the rest of competition law by economically irrelevant qualifications and distinctions based on private law categorisations of, and rationales for, individual intellectual property rights.

This bypassing of case-by-case analysis in favour of more traditional modes of legal reasoning is not entirely the fault of lawyers.

Economists have contributed to this state of affairs by urging judges and regulators to convert empirically undernourished theories about the proper role of intellectual property in a market economy into rules of law and evidentiary presumptions intended to be binding in future cases.

How this came about and what it means for the future of effective competition enforcement globally are the twin concerns of this book.