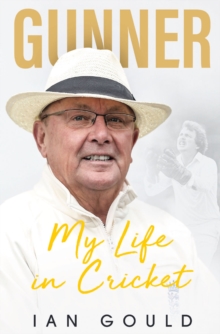 Gunner : My Life in Cricket Hardback

Gunner: My Life in Cricket is the revealing and absorbing autobiography of Ian Gould, the former England cricketer who became one of the best umpires in the world.

During a 13-year career as an elite umpire, 'Gunner' was centre stage for some of the biggest controversies in world cricket, including the infamous 'sandpaper' Test in 2018.

As a former international, he appreciated the pressures players were under and formed a rapport with some of cricket's biggest stars, although he always had the integrity of the game at heart.

In this candid story of his life in cricket, he is refreshingly honest about the characters and controversies, and he opens up about his battle with depression, after the introduction of DRS technology made the pressure on him intolerable.

There are colourful tales too from his days as a player and coach with England, Middlesex and Sussex, and about how he nearly became a professional footballer instead of a cricketer.

This included a stint at Arsenal which earned him the nickname 'Gunner'.