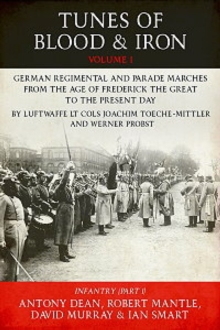 This is an extremely thorough 4 volume guide to the regimental march tunes and other parade music which inspired loyalty, pride and battlefield motivation for generations of Germans over three centuries.

Built around a translation of the previously unpublished works of two great German military music historians, the late Lieutenant Colonel Joachim Toeche-Mittler and Lieutenant Colonel (Retd) Werner Probst, it describes the history of every march in the official collections sanctioned by successive kings of Prussia, German Emperors, and later by Chief Inspectors of Music of the German Republic and Third Reich.

This work is no apology or eulogy for a militaristic culture now long gone amongst the German people, but a description of the international and home sources for the march repertoire, and the personalities involved in composing, commissioning, and dedicating marches to the leading personalities of the age, and their adoption as regimental music by the fighting units of Prussia and the other Old German States, Imperial Germany, and the later German Reich and Post War Republics of East and West Germany.

The series will provide information about how the regimental bandsmen and signaller musicians on fife, drum and bugle paraded and performed this repertoire, the manufacture and embellishments of their instruments, Schellenbaum 'Jingling Johnnies' and Drum Majors' Staffs, and their employment and deployment in the ranks of the fighting units on parade and in battle. After a short introduction, Volume 1 concentrates on the vast official Royal Prussian collection of'regimental' and 'neutral' quick marches.

Col. Joachim Toeche-Mittler, it provides a definitive description for each march, its composer, and how and by whom it was used, in many cases on campaign as well as on parade.

With only one exception before 1914, every Prussian, and most non-Prussian regiments, had their regimental march from within this collection.