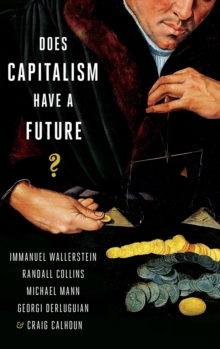 Does Capitalism Have a Future? Hardback

The Great Recession has prompted a reassessment of the specific mode of capitalist accumulation that achieved dominance in the era of globalization. Yet just about all of this literature has focused on one of two issues: why things went wrong, and what we need to do in order to return the system to stability.

Outside of a contingent of radical socialists on the fringes of the debate, virtually no one questioned whether capitalism could continue.

In Does CapitalismHave a Future?, the prominent theorist Georgi Derleugian has gathered together a quintet of eminent macrosociologists to assess whether the capitalist system can survive.

The prevalent common wisdom, for all its current gloom, nevertheless safely assumes that capitalism cannot break down permanently because there is no alternative.

The authors shatter this assumption, arguing that this generalization is not supported by theory but is rather an outgrowth of the optimistic nineteenth-century claim that human history ascends through stages to an enlightened equilibrium of liberal capitalism.

Yet as they point out, just about all major historical systems have brokendown in the end (e.g., the Roman empire). In the modern epoch there have been several cataclysmic events-notably the French revolution, World War I, and the collapse of the Soviet bloc-that came to pass mainly because contemporary political elites had spectacularly failed to calculate theconsequences of the processes they presumed to govern.

At present, none of our governing elites and very few of our intellectuals can fathom an ending to our current reigning system. Considering whether a collapse is possible is the task that the quintet-Derleugian, Michael Mann, Randall Collins, Craig Calhoun, and Immanuel Wallerstein-sets out to explore.

While all of the contributors arrive at different conclusions, they are in constant dialogue with each other and therefore able toconstruct relatively seamless-if open-ended-whole.

For instance, Wallerstein (who accurately predicted the collapse of the Soviet system in 1979) and Collins, identify fatal structural faults in twenty-first century capitalism.

Mann, on the other hand, does not think that there is any serious alternativeto the market dynamic, but he does identify other serious threats to the system, including environmental degradation. Calhoun and Derluguian are more circumspect and focus on the role of politics in steering the system toward either revival or collapse. This most ambitious of books, written by the highest caliber of sociologists, asks the biggest of questions: are we on the cusp of a radical world historical shift or not?