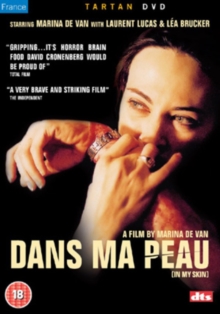 In My Skin DVD

Marina de Van writes, directs and stars in this intense and visceral psychological drama about a young woman who spirals into a cycle of physical self-harm.

When Esther (de Van), a sweet and self-conscious young woman with a good job and a steady boyfriend, falls and suffers injuries to her leg, she gradually becomes obsessed with her own body and skin to the point where she is aggressively carving wounds in her own flesh.

Her boyfriend, Vincent (Laurent Lucas) is understandably concerned and angry, but his inability to understand her disturbed psychological state forces Esther into further isolation and torment.