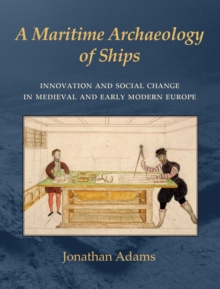 In the last fifty years the investigation of maritime archaeological sites in the sea, in the coastal zone and in their interconnecting locales, has emerged as one of archaeology's most dynamic and fast developing fields.

No longer a niche interest, maritime archaeology is recognised as having central relevance in the integrated study of the human past.

Within maritime archaeology the study of watercraft has been understandably prominent and yet their potential is far from exhausted.

In this book Jon Adams evaluates key episodes of technical change in the ways that ships were conceived, designed, built, used and disposed of.

As technological puzzles they have long confounded explanation but when viewed in the context of the societies in which they were created, mysteries begin to dissolve.

Shipbuilding is social practice and as one of the most complex artefacts made, changes in their technology provide a lens through which to view the ideologies, strategies and agency of social change.

Adams argues that the harnessing of shipbuilding was one of the ways in which medieval society became modern and, while the primary case studies are historical, he also demonstrates that the relationships between ships and society have key implications for our understanding of prehistory in which seafaring and communication had similarly profound effects on the tide of human affairs.