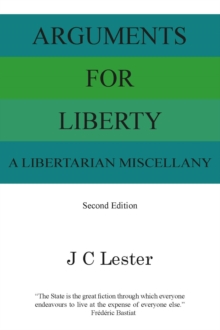 They see the aggressive coercion of the state as the main enemy of liberty.

The solution is to roll back the state until there is little or no state left.

Libertarianism has been rapidly growing since the 1970s but it is still not commonly understood or even given a proper hearing.

You will increasingly come across it. Often it will be state enthusiasts disingenuously claiming to be libertarians.

At other times it will be state enthusiasts attacking libertarianism as an extremist ideology. And very occasionally it will be real libertarians explaining and defending their views. J C Lester is a libertarian philosopher who has been writing about why liberty is preferable to politics for about 30 years.

This book contains many of his shorter writings on the subject.

These range from the populist to the philosophical. Together they function as a miscellaneous introduction to libertarianism.

The various different topics and approaches should give the reader a good cross-reference grasp of the subject.