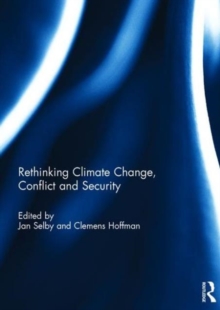 Is global climate change likely to become a significant source of violent conflict, and should it therefore be seen as a national security challenge?

Most Northern governments, militaries, think tanks and NGOs believe so, as do many academic researchers, on the grounds that increased temperatures, changing precipitation patterns and rising sea levels will worsen existing social stresses, especially within poor societies and marginal communities across Africa and Asia.

This book argues otherwise. The first collection of its kind, it brings together leading scholars of Anthropology, Geography, Development Studies and International Relations to provide a series of critical analyses of mainstream thinking on the climate-security nexus.

It shows how policy discourse on climate conflict consistently misrepresents the causes of violence, especially by obscuring its core political dimensions.

It demonstrates that quantitative research provides a flawed basis for understanding climate-conflict linkages.

It argues that climate security discourse is in hoc with a range of questionable military, authoritarian and developmental agendas. And it reveals that the greening of global capitalism is already having violent consequences across the global South.

Climate change, the book argues, does indeed have serious conflict and security implications - but these are quite different from how they are usually imagined. This book was published as a special issue of Geopolitics.