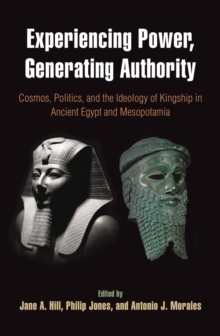 For almost three thousand years, Egypt and Mesopotamia were each ruled by the single sacred office of kingship.

Though geographically near, these ancient civilizations were culturally distinct, and scholars have historically contrasted their respective conceptualizations of the ultimate authority, imagining Egyptian kings as invested with cosmic power and Mesopotamian kings as primarily political leaders.

In fact, both kingdoms depended on religious ideals and political resources to legitimate and exercise their authority.

Cross-cultural comparison reveals the sophisticated and varied strategies that ancient kings used to unify and govern their growing kingdoms. Experiencing Power, Generating Authority draws on rich material records left behind by both kingdoms, from royal monuments and icons to the written deeds and commissions of kings.

Thirteen essays provocatively juxtapose the relationships Egyptian and Mesopotamian kings had with their gods and religious mediators, as well as their subjects and court officials.

They also explore the ideological significance of landscape in each kingdom, since the natural and built environment influenced the economy, security, and cosmology of these lands.

The interplay of religion, politics, and territory is dramatized by the everyday details of economy, trade, and governance, as well as the social crises of war or the death of a king.