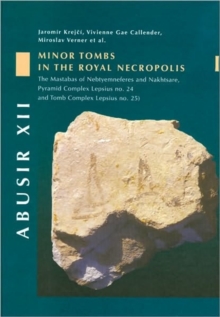 This monograph presents a report on the results of the archaeological excavations of the Czech Institute of Egyptology undertaken from 1987 until 2004 and held in the area of the Abusir minor tombs clustered around the tombs of the 5th Dynasty kings.

The first chapter is devoted to the excavation and description of the mastaba of Nebtyemneferes, a rather enigmatic identity probably a princess who was buried among the tombs of the members of the royal family in the southern part of the Abusir pyramid necropolis.

The tomb includes common features of Abusir tombs of the period.The second chapter deals with research into the mastaba of Prince Nakhtsare, located to the south of Raneferef's mortuary temple; it is the northernmost tomb in a row of tombs located on the southern border of the royal necropolis. The important position of this very destroyed tomb is also indicated by its rich burial equipment, as well as by the masons' marks found on the masonry of the mastaba.

The third chapter is devoted to the pyramid complex of an unknown queen in a tomb known as Lepsius no. 24. Because a large number of masons' marks was present on this pyramid's walls, and, in addition, because of the bad state of preservation of this monument, we have been able to study in an unique way the methods used by the ancient architects and builders in the construction of royal monuments in the middle of the Fifth Dynasty.

A further chapter is dedicated to a most exceptional complex the monument known to us now as Lepsius no. 25. This monument represents a double tomb whose name was written as double pyramid.

Unfortunately, it is in a very desolated state of preservation, so much so that many details of its intriguing architecture as well as the burial equipments, etc., have been lost to us forever.

The sixth chapter is devoted to the anthropological material discovered during the archaeological excavations of these monuments.

The majority of this material is represented by remains coming from the Late Period cemeteries, which once covered this area.

In addition to this fairly large group, there is one very significant study featuring the fragments of a female mummy which might have belonged to the owner of the pyramid complex Lepsius no. 24. A study of the stone vessels found in the monuments discussed in this monograph represents an Appendix.