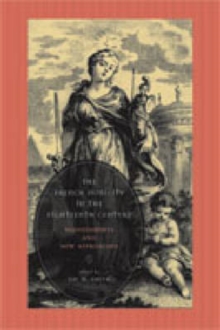 The French Nobility in the Eighteenth Century : Reassessments and New Approaches Hardback

Historians have long been fascinated by the nobility in pre-Revolutionary France.

What difference did nobles make in French society? What role did they play in the coming of the Revolution?

In this book, a group of prominent French historians shows why the nobility remains a vital topic for understanding France's past. The French Nobility in the Eighteenth Century appears some thirty years after the publication of the most sweeping and influential "revisionist" assessment of the French nobility, Guy Chaussinand-Nogaret's La noblesse au dix-huitieme siecle.

The contributors to this volume incorporate the important lessons of Chaussinand-Nogaret's revisionism but also reexamine the assumptions on which that revisionism was based.

At the same time, they consider what has been gained or lost through the adoption of new methods of inquiry in the intervening years.

Where, in other words, should the nobility fit into the twenty-first century's narrative about eighteenth-century France?The French Nobility in the Eighteenth Century will interest not only specialists of the eighteenth century, the French Revolution, and modern European history but also those concerned with the differences in, and the developing tensions between, the methods of social and cultural history. In addition to the editor, the contributors are Rafe Blaufarb, Gail Bossenga, Mita Choudhury, Jonathan Dewald, Doina Pasca Harsanyi, Thomas E.