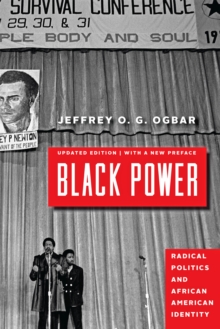 Exploring the profound impact of the Black Power movement on African Americans. Outstanding Academic Title, ChoiceIn the 1960s and 70s, the two most important black nationalist organizations, the Nation of Islam and the Black Panther Party, gave voice and agency to the most economically and politically isolated members of black communities outside the South.

Though vilified as fringe and extremist, these movements proved to be formidable agents of influence during the civil rights era, ultimately giving birth to the Black Power movement. Drawing on deep archival research and interviews with key participants, Jeffrey O.

Ogbar finds that many African Americans embraced the seemingly contradictory political agenda of desegregation and nationalism.

It engendered minority pride and influenced the political, cultural, and religious spheres of mainstream African American life for the decades to come. This updated edition of Ogbar's classic work contains a new preface that describes the book's genesis and links the Black Power movement to the Black Lives Matter movement.

Ultimately, Black Power reveals a black freedom movement in which the ideals of desegregation through nonviolence and black nationalism marched side by side.