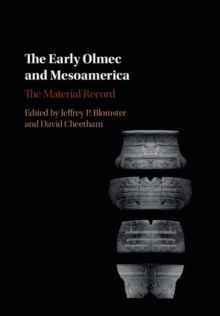 The Early Olmec and Mesoamerica : The Material Record Hardback

The Early Formative Olmec are central in a wide variety of debates regarding the development of Mesoamerican societies.

A fundamental issue in Olmec archaeology is the nature of interregional interaction among contemporaneous societies and the possible Olmec role in it.

Previous debates have often not been informed by recent research and data, often relying on materials lacking archaeological context.

In order to approach these issues from new perspectives, this book introduces readers to the full spectrum of the material culture of the Olmec and their contemporaries, relying primarily on archaeological data, much of which has not been previously published.

For the first time, using a standard lexicon to consider the nature of the interaction among Early Formative societies, the authors, experts in diverse regions of Mesoamerican art and archaeology, provide carefully considered contrasts and comparisons that advance the understanding of the Early Formative origins of social complexity in Mesoamerica.