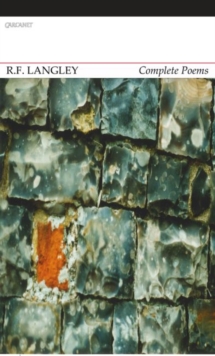 R.F. Langley is known for his meticulous observation of the natural world and his highly original voice.

This volume brings together his two previous Carcanet collections, Collected Poems (2000) and The Face of It (2007), along with his celebrated but uncollected late poems, including 'To a Nightingale', which won the 2011 Forward Prize for Best Individual Poem.

The book includes a biographical introduction and a rare note by the poet on his own compositional practice.

Langley kept a careful record of the reading and writing which inspired his poems; this edition is fully annotated with these sources, making it an invaluable guide for readers wanting to explore the visionary imagination of this master craftsman.