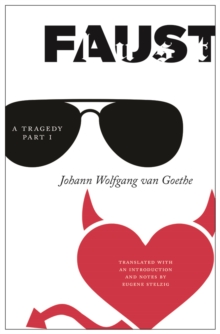 Goethe is the most famous German author, and the poetic drama Faust, Part I (1808) is his best-known work, one that stands in the company of other leading canonical works of European literature such as Dante's Inferno and Shakespeare's Hamlet.

This is the first new translation into English since David Constantine's 2005 version.

Why another translation when there are several currently in print?

To invoke Goethe's own authority when speaking of his favorite author, Shakespeare, Goethe asserts that so much has already been said about the poet-dramatist 'that it would seem there's nothing left to say,' but adds, 'yet it is the peculiar attribute of the spirit that it constantly motivates the spirit.' Goethe's great dramatic poem continues to speak to us in new ways as we and our world continually change, and thus a new or updated translation is always necessary to bring to light Faust's almost inexhaustible, mysterious, and enchanting poetic and cultural power.

Eugene Stelzig's new translation renders the text of the play in clear and crisp English for a contemporary undergraduate audience while at the same time maintaining its leading poetic features, including the use of rhyme.